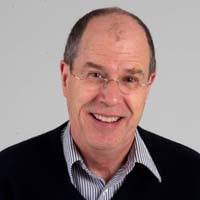 When Bob Fischbach took over the Omaha World Herald theater beat in 2004, “I didn’t have a single name or phone number in my Rolodex. Not one source.” Over ten years later, Rolodexes don’t exist, and Fischbach has more contacts than an optician. After nearly one thousand community theater reviews, Fischbach is capping his pen for the final time after reviewing “Mary Poppins” at the Rose later this month. “I think it’s healthy to have a new voice,” he reasons.

Fischbach’s voice has resonated in the theater community since his first review in 1997. Countless fans have been drawn to shows by his preview articles, and countless actors have followed up their Friday night performances by logging on to read their review in Saturday’s paper.

Fischbach was not originally hired as a reviewer, logging over twenty years as a copy editor at the Omaha World Herald. He began by volunteering to review shows that then reviewers Jim Delmont and John Keenan couldn’t cover. When they retired, Fischbach applied for the job.

While he loved reviewing shows, Fischbach was “petrified” of the reporting side of the job. “I’m an introvert, and the idea of calling strangers cold did not work for me.” He tried to persuade the World Herald that someone else should write them, which nearly blew the job interview. Now he enjoys the preview articles as much as the reviews. In addition to local talent, Fischbach has had the opportunity to interview numerous celebrities over the years. The most intimidating may have been Edward Albee, one of his favorite writers. “I had an hour with him, and I spent two weeks preparing. I read everything about him I could get my hands on.”

Before becoming a journalist, Fischbach trod the boards himself, performing in college and repertory theater. Returning to the stage in retirement isn’t out of the question, although performing a monologue for a Shelterbelt fundraiser in 2014 reminded him how much time and stress go into acting. Anyone who saw his perform knows he has some chops.

Obviously, all four roles are from musicals, by far Fischbach’s show preference when he began reviewing. Over time his tastes have changed. “I prefer dramas equally now.” That becomes apparent when he lists his top ten local productions of all time. Well, it was supposed to be ten, but that was impossible. He finally whittled the list down to fourteen, and then he began talking about more productions he loved that didn’t quite make the list. His love—absolute love—of theater is manifest. As with his annual top ten list, the shows are in alphabetical order.

On June 2, Bob Fischbach cleared out his desk at the newsroom. He will file his last review today, June 5, and the Omaha Community Playhouse will host a retirement party for him on June 8. Then he will return to civilian life, enjoying shows without worrying about making a deadline. Whatever his next act holds in store, I think I can speak on behalf of the entire theater community: