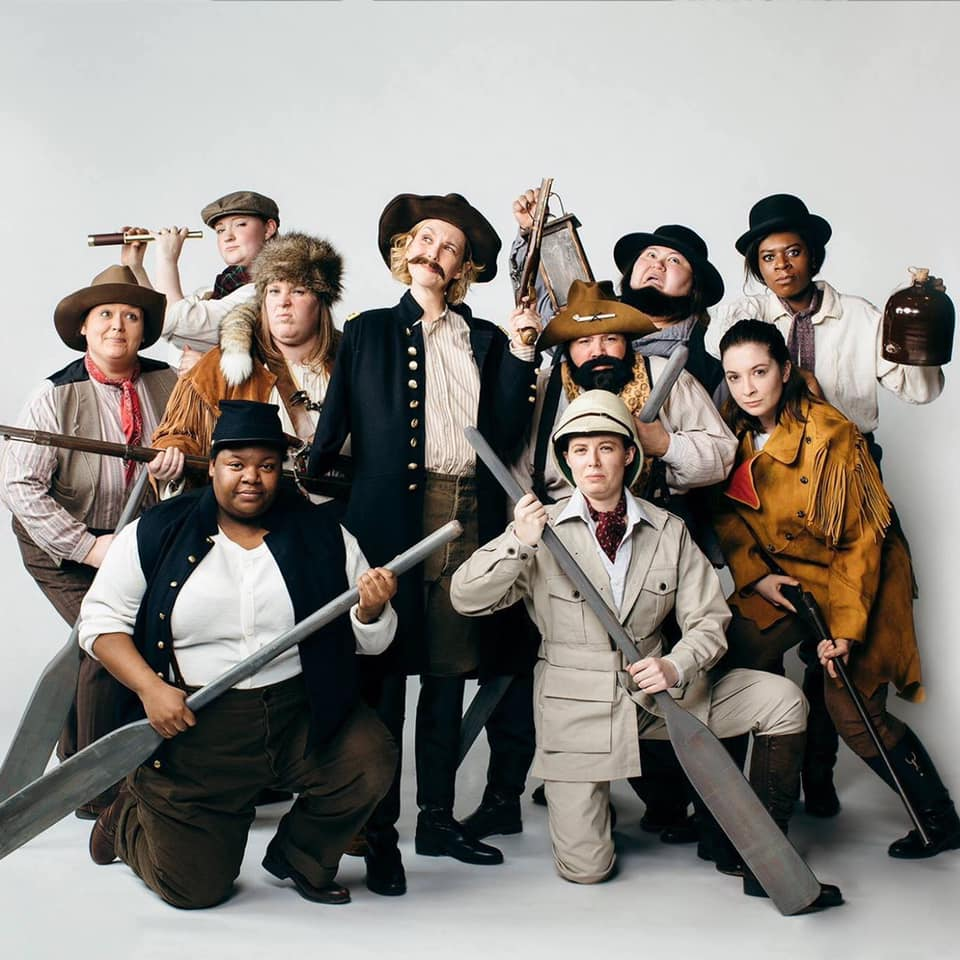 Jaclyn Backhaus first remembers learning about John Wesley Powell’s exploration of the Colorado River in her fourth grade history class. “My dad is very interested in explorer tales, and he had a copy of Powell’s journals that I would flip through as a kid,” she recalls.

She returned to Powell’s journals as a playwright, wanting to experiment with adventure as a theatrical genre and recreating the thrill and desperation of navigating the Colorado River rapids onstage. As she worked through a first draft, Backhaus recognized that she was writing ten roles that she, and no one like her, could ever portray in a conventional production. The story was about a group of white male explorers in 1869. What to do?

The Omaha Community Playhouse’s production of Backhaus’ solution, “Men on Boats,” opens on May 3.

According to director Amy Lane, Backhaus squares this circle by challenging directors to cast racially diverse, non-male actors to portray the historically white male crew. “The play is about marginalized voices. Historically, only white men had the privilege of adventure…but today, why can’t we celebrate the adventurous spirit inherent in us all? In this play, everyone gets to take a ride down the rapids.” As Backhaus explains, “What better medium to find inclusivity than the medium of theater, when you’re working on a live experience that will be shared by a community?”

Men on Boats is the “true-ish” story of ten explorers on four boats charting the course of the Colorado River one hundred fifty years ago. Director Amy Lane has assembled a terrific cast of women for the Playhouse production. The audience follows the expedition crew, led by a one-armed Civil War officer (played by Teri Fender), as they bond, scrap, and argue over directions while navigating the perilous waters of the Colorado River.

“We started day one with the boat scenes,” according to Lane. The cast watched videos of running rapids down the Colorado River, rowing techniques, and even how to portage a canoe. “We do the boat scenes as warm-up for every rehearsal. They are intense and extremely difficult both physically and in terms of memorization as the lines are rapid-fire. I think we’ve come up with an exciting and visually interesting way to watch these rapids scenes. They are my favorite part of the show.”

This fast-paced comedy is a bit of a cross between Lin Manuel Miranda’s “Hamilton” and the Lewis and Clark expedition: a very modern take on a very old American adventure story. The play is comic, not campy. “We aren’t fooling anyone that these are really women portraying male characters,” explains Lane, “but we are performing different aspects of what could be labeled “masculine” behavior.”

Lane observes that her cast’s reaction to this intense exploration is similar to that of the original crew. “The actors have bonded in an incredible way because these scenes in particular rely so heavily on teamwork and trust. They have transformed the cast. They have truly become boat mates.”

The Omaha Community Playhouse’s production of “Men on Boats” will run from May 3 through May 26. Shows are Thursday, Friday and Saturday nights at 7:30, with Sunday matinees at 2:00. Tickets are $30. Don’t forget about Lucky 7 tickets:  $7 tickets are available to students (kindergarten through full-time undergraduate college) for all opening weekend performances.  Half price “twilight tickets” may also be available in person at the box office window starting at noon on the day of the show. Cash and check are the only accepted forms of payment for twilight tickets. No phone reservations accepted for this special offer, and seats are limited and subject to availability. No advanced reservations can be made for twilight tickets. The Omaha Community Playhouse is located at 6915 Cass Street in Omaha. Tickets are available by calling the Omaha Community Playhouse box office at (402) 553-0800 or toll free at 1-888-782-4338 or online at www.omahaplayhouse.com/tickets/view/boats/. Box office hours are Tuesdays and Wednesdays from 10 am to 5 pm, Thursdays, Fridays and Saturdays from:  10 am to 6:30 pm and Sundays from noon to 4 pm. Questions? Contact the OCP box office or e-mail them at: info@omahaplayhouse.com.