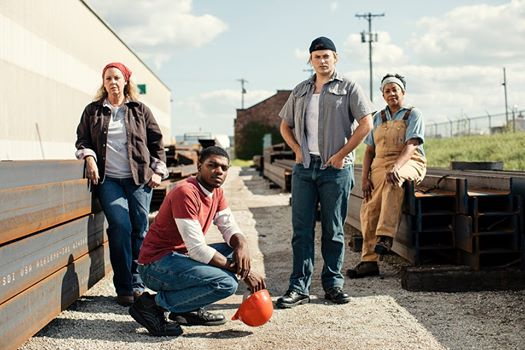 Sweat by Lynn Nottage is set in a Reading Pennsylvania bar populated by steel workers, male and female, black and white, who watch helplessly as their lives are turned upside down by de-industrialization. The play opened off Broadway shortly before the 2016 presidential election. When the dust cleared, the New York Times wrote that the play “is the first work from a major American playwright to summon, with empathy and without judgment, the nationwide anxiety that helped put Donald J Trump in the White House.”

The Omaha Community Playhouse opens its ninety-fifth season with this Pulitzer Prize winning drama. Nottage is the only woman to have won the Pulitzer for drama twice, placing her alongside Tennessee Williams, Thornton Wilder and August Wilson. Nottage fans will remember OCP’s marvelous production of her play “Intimate Apparel” in 2008.

Nottage says she spent two and a half years interviewing residents of Reading in developing Sweat. “My motto when I was writing this was ‘replace judgment with curiosity.’” Susie Baer Collins is thrilled with the opportunity to direct the Omaha premier. “Sweat begins with a mystery for the audience that won’t be resolved until the final moments of the play,” explains Collins. “It begins in the year 2008 as two young men, now on parole after 8 years in prison, still struggle in the wake of the criminal act they committed back in 2000. We witness the series of events that led up to the crime, which indelibly changed their lives and the lives of those around them.”

While the story is set in a blue collar steel town, the stress of economic displacement will be familiar to many blue and white collar Omahans. “When the jobs go, one of the first things to jump ship is the sense of worth,” notes Collins. “They lose their identity.” Collins wants to immerse the audience in this experience; to fully grasp what is at stake for each character. “I don’t want us to sit back. It’s easy to look at those stories and believe it doesn’t apply to me.” But, all too often it does, regardless of your line of work. How is her cast accomplishing this? “Honesty and chops,” says Collins. “They’re going to the wall for this remarkable play.” She also lauds the contribution of Omaha composer Tim Vallier, who is designing a soundscape to underscore the action.

After “Sweat” closed on Broadway in 2017, the production traveled to Reading. Notting was petrified at how the play would be received. “I was shocked by how readily audiences who, by and large, had never entered a theatre before received the play and felt it was resonant of their own experiences.” Notting’s goal was “to bridge a divide and get people to see that we all share one narrative. At the end of the play, I didn’t want to draw any conclusions. I don’t think of myself as a moralizing playwright who wants the audience to leave with a specific lesson. What I do hope is that at the end, the audience will go off to some bar and enter into a robust conversation about the issues raised.”

The Omaha Community Playhouse’s production of “Sweat” by Lynn Nottage will run from August 16 through September 15. Shows are Thursday, Friday and Saturday nights at 7:30, with Sunday matinees at 2:00. Tickets start at $36. Don’t forget about Lucky 7 tickets:  $7 tickets are available to students (kindergarten through full-time undergraduate college) for all opening weekend performances. Be mindful that “Sweat” contains a lot of strong language and a depiction of violence. Half price “twilight tickets” may also be available in person at the box office window starting at noon on the day of the show. Cash and check are the only accepted forms of payment for twilight tickets. No phone reservations accepted for this special offer, and seats are limited and subject to availability. No advanced reservations can be made for twilight tickets.

The Omaha Community Playhouse is located at 6915 Cass Street in Omaha. Tickets are available by calling the Omaha Community Playhouse box office at (402) 553-0800 or toll free at 1-888-782-4338 or online at www.omahaplayhouse.com/tickets/view/sweat/. Box office hours are Tuesdays and Wednesdays from 10 am to 5 pm, Thursdays, Fridays and Saturdays from:  10 am to 6:30 pm and Sundays from noon to 4 pm. Questions? Contact the OCP box office or e-mail them at: info@omahaplayhouse.com.