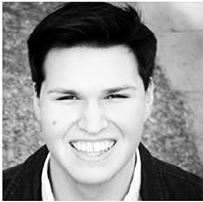 I’m frequently reminded, by friends and strangers alike, how kind Omaha’s theatre community has been to me over the years. I always nod enthusiastically, voice my confirmation, assuring them that it doesn’t go unnoticed. And truly: it does not go unnoticed. I, more than anyone, know that I’ve been blessed time and time again.

I’d be remiss not to note that Omaha’s Theatre Arts Guild has been the kindest in offering me these blessings. To name a few, I’ve been the recipient of five TAG awards (from sixteen nominations); I was granted the 2011 TAG scholarship, which helped offset a portion of my tuition costs when I started college; and, most recently, the TAG board offered me a $300 grant to help send me to Chicago to join the workshop of a new script being developed there.

Some backstory: this past summer I was invited to perform in the workshop production of R&J in ASL, a retelling of Romeo and Juliet using American Sign Language. Set in 1950’s Martha’s Vineyard when a unique hearing/Deaf bilingual agricultural community gave way to a budding tourism industry, R&J in ASL focuses on the intense cultural lines drawn between the hearing and non-hearing as land, lifestyle, and livelihoods ignite the Capulet and Montague families.

The invitation asked for a three-week time commitment that culminated in a weekend of performances for a handful of producers from various Chicago theatres. The timing couldn’t have been more perfect. Having already unenrolled from college for the semester so I could attend daytime rehearsals for The Cat in the Hat, a three week trip out of town would be completely doable.

When all was said and done, the show received offers from a number of theatres extending contracts to house a full production. The one chosen is one of the hottest storefront theatres in Chicago and they’re offering Equity contracts to all of their actors, including myself. I’m currently in negotiations with the company and if all works out, I’ll be headed to Chicago in the autumn of 2015 to perform in my Chicago debut.

My heartfelt thanks and appreciation to the Theatre Arts Guild for their continued support! This simply couldn’t have been done without them.